Another excellent concert at the festival yesterday night !

I didn't regret going. The voices of this famous British vocal sextet are like angels' and the acoustics of the abbey church are so good that you get goose bumps every two minutes. Their programme was very well balanced, all about dance songs from different centuries and countries. The second part after the interval got me humming, foot-tapping and shoulder-moving much to the dismay of the grey and solemn heads around me. I knew many of the songs they sang because I have one of their CDs at home. The arrangements were very clever, even with songs I had already heard, because all of the six members had such beautiful voices.

I found some of their tunes on the Internet but not with the same line-up because it is an a capella group which dates back to the 80s and they have changed their singers quite frequently. At the moment there are two very young singers (tenor and countertenor) in their twenties who have high but really fully modulated voices. What they can do vocally-speaking is incredible. They can beat any little soprano anytime.  :)

Here are the videos I found :
Tanzen und Springen by Hans Leo Hassler.This is  an old version broadcast by the BBC which looks dated but it gives an idea of the opening song of the recital.
Then always in the first part of the concert, there was Now is the Month of Maying by Thomas Morley . The presenter of the piece (the tall man with the reddish hair on the right) said that it is about what young people do when spring comes and let our imagination run wild ! The only singer not belonging to the group I saw yesterday was  the bass singer on the very far right.

In the following video clip, you can hear a full concert broadcast by The BBC during the prom season  in 2011 to celebrate the 40th anniversary of the group.


I heard song 3 : Clic, Clac, Dansez sabots ( Francis Poulenc at about 6 minutes) and song 15 : Greensleeves (supposedly written by Henry VIII) at 51.41 : a delight to hear! Those two versions were close to what I had the pleasure to see.


In the first part there was also a nonsense madrigal inspired by Lewis Carroll called the Lobster Quadrille by Gyorgy Ligeti where we hear all kinds of animals speaking :

The video is here, I can't manage to include it in the blog page....

Later in the second part of the programme, we had a very moving version of Danny Boy :


Next a funny Canadian folk song called  Feller from Fortune.  Another one full of onomatopoeic sounds I am a train.

Their encore was Home by Michael Bublé, one of their favourites probably because they are always on the road to sing good music.

Try something new for 30 days !

A truly inspiring video, now what fun thing could I do  for thirty consecutive days ? :)

Yet another talk says not to tell your goals to anyone because sometimes talking replaces doing....

A Moveable Feast with Allen and Hemingway

A few weeks ago, I went to the movies to see the latest film by Woody Allen : Midnight In Paris. It was really funny because when I went out of the cinema it was nearly midnight and I was in Montmartre, the perfect setting to see a vintage car coming out of the fog to take you back in the twenties with Hemingway, Picasso, Dali and the like :)

I really enjoyed the movie, even if some pictures were too cliché to bear, many cameos made the film hilarious : Adrian Brody as Dali, Gad Elmaleh as a private detective who's going to be decapitated in the French revolution etc.

Woody Allen placed many allusions to famous books and movies in his characters' mouths and it made me buy the book by Hemingway called "A Moveable Feast" to put it in my summer reading list. I love Paris but Hemingway is not my favourite author. I hope that the book will reconcile me with him.

"If you are lucky enough to have lived in Paris as a young man, then wherever you go for the rest of your life, it stays with you, for Paris is a moveable feast."

And to finish here is his Nobel Prize acceptance speech where you can hear his very determined style :

This American artist has just died at the age of 83.

Not that I knew much about him but his interest in Italy touched a soft spot in me since I love Italy and at an oral exam that I failed, I had the topic of graffiti to discuss...Also like many of these Modern artists, you need to scratch the surface to understand the meaning of their work. I learnt that the Gugenheim museum in Bilbao has a series of painting by him, so I'll try to check them when I'm over there. One of them is shown below : 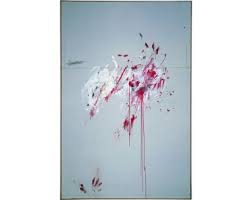 The painting above is in El Prado Museum, and the next is on one of the ceilings of the Louvres Museum, it looks less like a graffiti but has such a lovely blue colour :

In the Tate Modern, they have twenty-three, maybe one  will be on display when I go this summer...I'm dying to see some paintings at the moment...Strange how this taste came to me. :)

I really would like to go and see the Mac Val summer exhibition called Itinéraires bis, their permanent collection has a new theme : memory and fidelity. I'll try to go as well this summer :)
Publié par fruitmuffin à 15:09 Aucun commentaire: